“the glimpse traveler”, by Marianne Boruch

I don’t usually do book reviews unless something strikes me as unusual. This is cliché Sixties memoir, except that it isn’t. 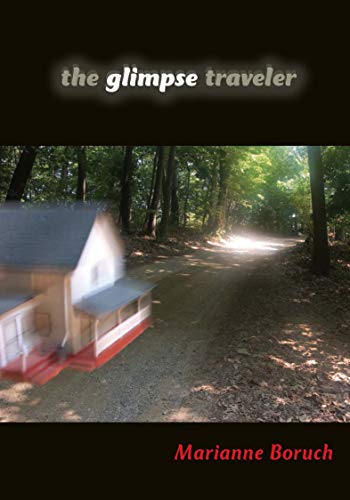 I didn’t want it to end. As a memoir it reads like most, meaning “This happened to me once and I’m still trying to figure out what it means.” Don’t get me wrong, it’s well-told, lyrical and she drew me back to my own youth, to the early Seventies when we all had lost our footing and become scared by the very things that had excited us: the mind-freeing drugs, body-freeing clothes, spirit-freeing music, the things that somehow had all gone beyond us and out there where most of us couldn’t follow anymore. And the ones that did never came back.

Like me, she observed more than lived through those years and managed to put her observations into this single pointed narrative of one small point in time, a narrative that I recognized. We both stumbled into road trips that promised we’d find answers (though no one was sure what the questions were). Then (with hidden relief) we went back to our babies and our careers and were reasonably happy but never again felt that aliveness, that breathtaking belief in the possible. Never even realized we had left it behind. Until we read someone else’s story and think, my god, that was my story too, only completely different. I was there, only somewhere else. Why did I forget? Not how could I, but why? Boruch doesn’t answer that, but I suppose none of us can.

2 thoughts on ““the glimpse traveler”, by Marianne Boruch”